Groot Drakenstein – RFG Foods Holdings (RFG) increased turnover by 10.8% to R4.6 billion in the year to September 2017, with strong growth in South Africa and the rest of Africa and lower international revenue.

The strengthening of the Rand, significantly lower global demand for industrial pulp and puree products, and increasing canned fruit costs as a result of the drought in the Western Cape resulted in international sales declining by 18.1%.

Gains in the regional business were offset by the lower international performance which contributed to operating profit declining by 18% to R407 million. Headline earnings were 19% lower at R237 million.

The group declared a cash dividend of 31.1 cents per share.

Chief executive officer Bruce Henderson said: “In the regional segment, our fresh foods division grew sales by 30.1% with continued excellent growth in the pie category across all sales channels and good growth in ready meals. Sales in the long life foods division increased by 15.9%.”

Sales in the rest of Africa, where RFG operates in 12 countries, increased by 47%, driven by robust demand for canned meat and fruit juice across the region.

RFG successfully integrated its two largest acquisitions of Durban-based food manufacturer Pakco and KwaZulu-Natal pie producer Ma Baker. The businesses contributed combined turnover of R230 million for the six months since being acquired. RFG has completed eight acquisitions since its listing on the JSE three years ago.

“Pakco has a range of strong brands including the iconic Bisto brand, Hinds Southern Coating, Pakco and Trotters, and the acquisition has enabled RFG to enter the dry packed foods market.

“Ma Baker is the market leading pie brand in KwaZulu-Natal. The acquisition has strengthened our position in the growing pie and pastry market and also creates synergies with our existing pie, snacking and bakery businesses,” said Henderson.

RFG owns 14 production facilities across South Africa and Eswatini. Record capital expenditure of R487 million was invested in upgrading production capacity and efficiency in the past year. Projects included the construction of a baby food and flexible packaging factory, completion of the three-year upgrade of the Bull Brand facility and increasing production capacity at its fruit juice, fruit products, vegetable and pie facilities.

Discussing the group’s plans for the year ahead, Henderson said the focus in the regional business will on driving organic growth, maximising benefits from the recent acquisitions and big capital investment projects, growing brand shares and capitalising on the sales momentum in sub-Saharan Africa.

The group cautioned that while the outlook for the international canned fruit market is positive, the continued drought in the Western Cape is expected to impact costs owing to poorer quality fruit, which will result in lower yields and higher labour costs.

Capital investment of R350 million is planned for 2018 with major projects including the consolidation of certain production facilities acquired through recent acquisitions, capacity expansion at the pie and bakery facilities, and the installation of a clear juice concentrate plant at the Groot Drakenstein production hub adjacent to the RFG head office. 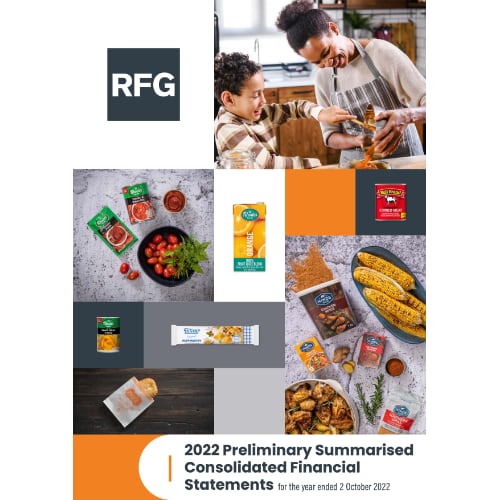